An average house owner with a vegetable garden will most likely discourage you from planting tomatoes from seeds because it is a complicated process. The best way is to buy ready-to-plant seedlings from a nearby nursery. This is what we’ve done in the past. However, this year, against all odds, I decided to experiment with tomato seeds I saved from last year’s crop.

I bought a mini greenhouse tray and followed instructions on the label. It was supposed to be a small scale venture, a couple plants in the corner of the garden. Little did I know that out of the 90 seeds I planted, about two thirds will germinate! On top of that, I forgot that the type of tomato I planted grows two meters high!

I started with a lot of positive energy and optimism, determined to save as many seedlings as possible. Approximately 30 of them ended up taking entire area of our small vegetable garden. I also planted a few in several bamboo pots and gave away some of them to neighbors and friends. 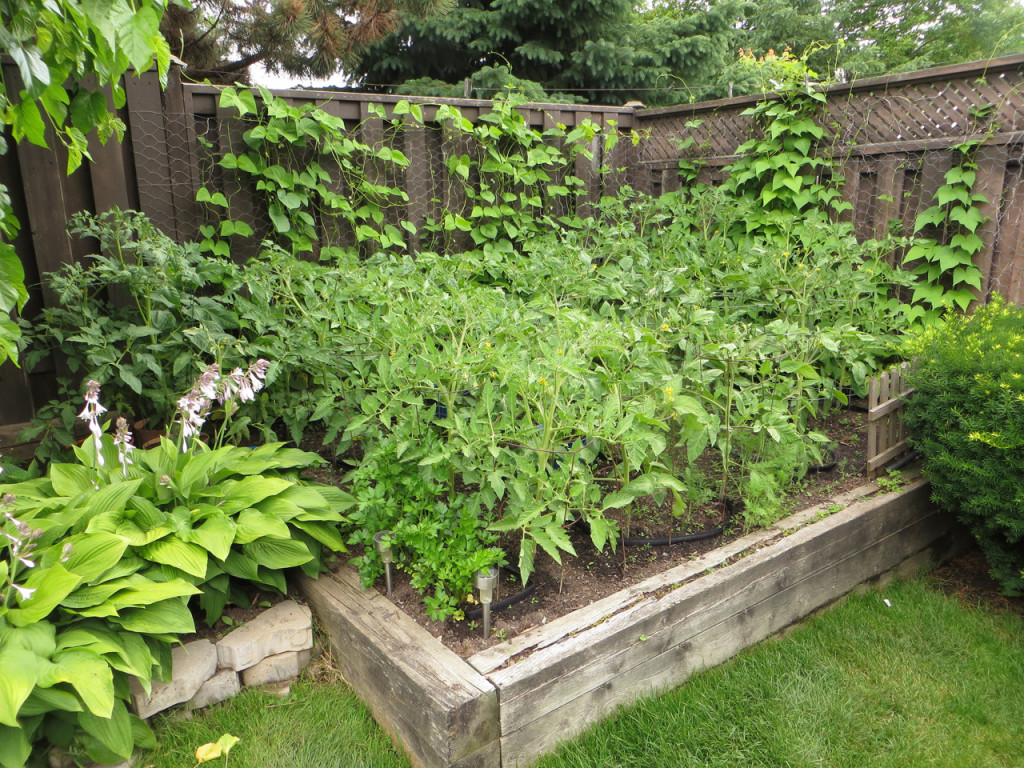 In the process, I learned how resilient tomato plants are.
During re-potting, I accidentally broke one of my plants at the base.
I was sure it won’t survive but out of curiosity I patched it with toothpicks and some bandage to see if it will live. Miraculously, it recovered completely, flowered and had fruits like all other plants. 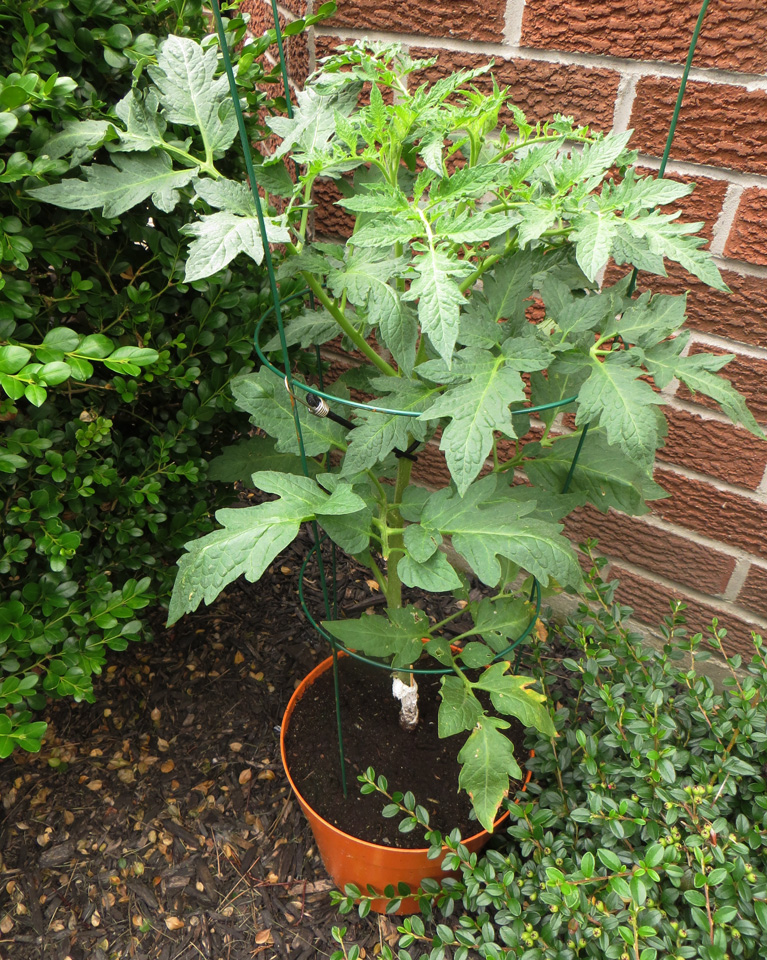 With 30 seedlings planted and some given away I still had almost 30 left!
For this last batch, I found a home behind my friend’s house.
That particular patch of land was not really suitable for a vegetable garden, but after digging through it several times and adding some good soil, fertilizer and compost it looked like it might work. I planted remaining seedlings, set-up an elaborate, timer-controlled irrigation system, installed metal cages around the plants and voilà! .. I was done!

For a while all plants were doing great, healthy and strong. Until one day I noticed small holes in the leaves.  After closer inspection I noticed tiny beetles which were snacking on my precious garden! The ‘oracle of google’ stated that these were Flea Beetles and unfortunately there was not much I could do about them.

In the local nursery I purchased special spray to fight the little buggers. Later, to lower the costs, I transitioned to home made isopropyl alcohol based, soapy solution which I sprayed on all tomato plants, but I can’t say that either one was 100% effective.  However, this got totally overshadowed by another nasty surprise!

This is the first time I actually noticed Japanese Beetles. Apparently they’ve been thriving in this area for a few years but only now I realized how much damage they can do! They are also difficult to get rid of. The traps work, but also tend to attract beetles from the nearby area. The good news was, that these beetles don’t usually like to feed on tomatoes, although I did find a few snacking on my plants. At first I tried collecting them into the bucket filled with warm soapy water.  It is best to do that in the evening when they are tired and less likely to fly away.  Unfortunately for every 20 I drowned another 40 would show up the next day! Eventually I gave in and bought the trap which seemed to somewhat reduce the population. 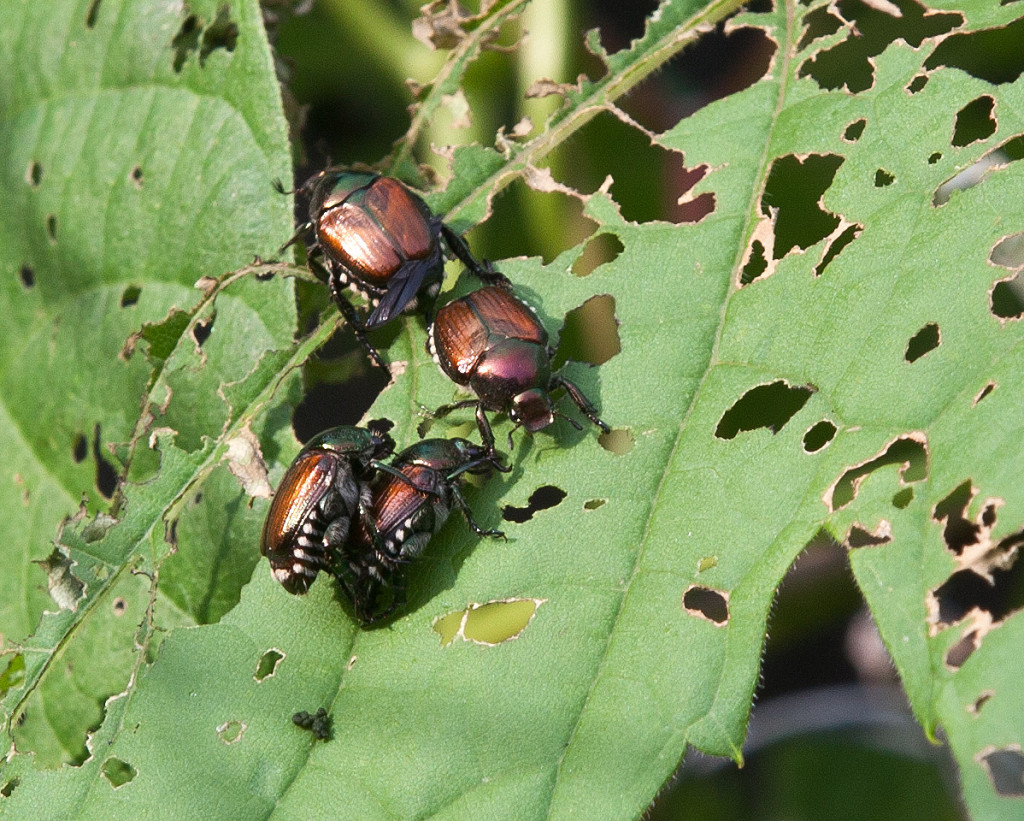 Thanks to timely preventive actions and ongoing TLC, tomato plants continued to grow and eventually started to flower. 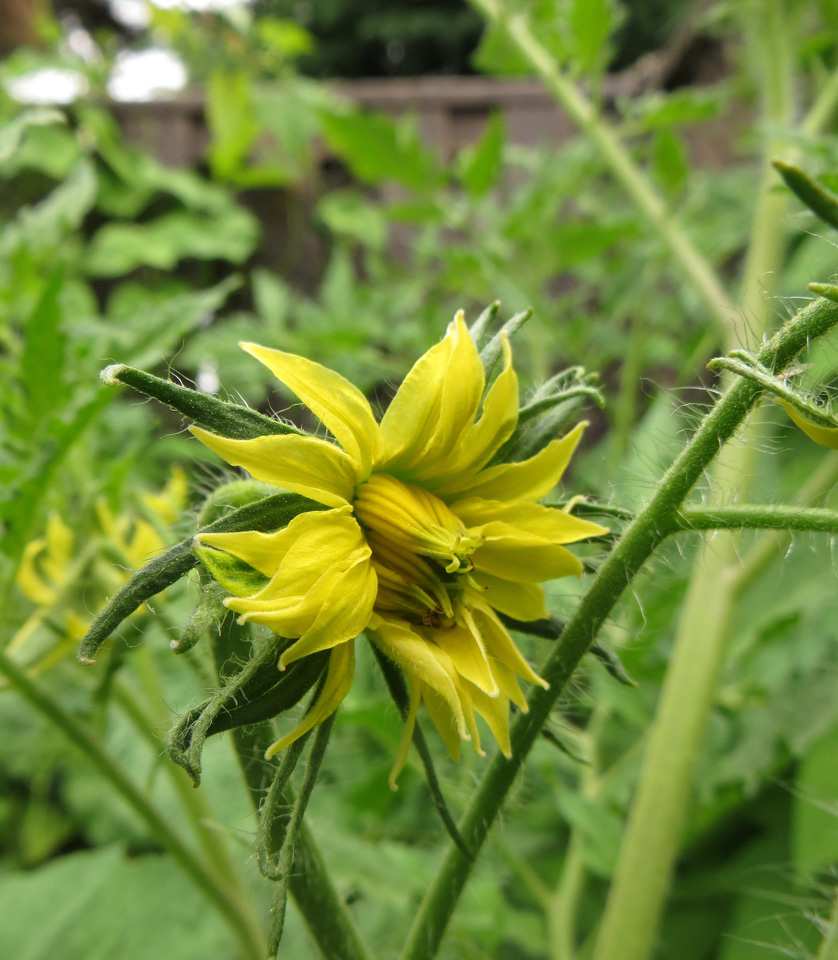 The plants were getting really tall, some taller than me! I had to quickly come up with some sort of a support structure to prevent branches from breaking. The only option I came up with was to tie cages with the string and attach them to the fence. This made walking between the plants a real challenge and eventually I needed to start trimming the tops and sides.

During the trimming I found yet another creature happily feasting away on the leaves. Tabacco Hornworm apparently also likes to feed on tomatoes. When I found it I assumed that the white sacks are the caterpillar’s eggs. As it turned out they are the pupae of the Braconid Wasp. These wasps prey on hornworms. They hunt down our garden pests, inject their eggs into their prey where the eggs hatch into larvae and begin eating the internal organs of the hornworm. After these “maggots” have matured they bore through the skin of the hornworm and proceed to spin a cocoon and attach themselves to the worm. From the cocoons emerge adult Braconid Wasp which will begin hunting for other Tomato Hornworms and Tobacco Hornworms to feast upon. 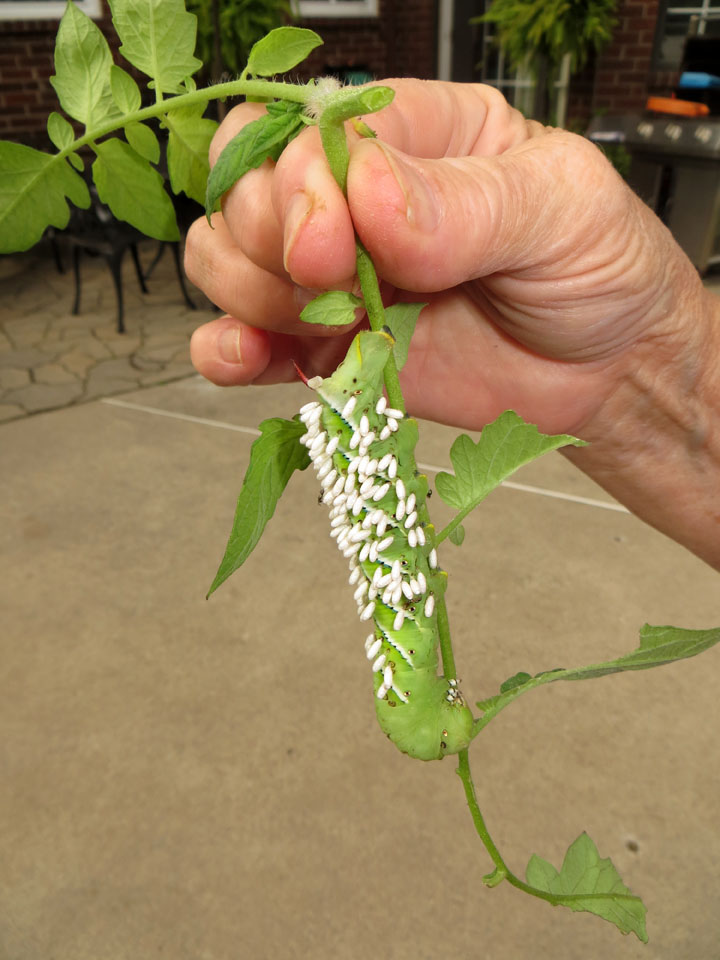 These of course are not the only creatures living in the vegetable garden.  We also found some swallowtail caterpillars which if left alone would turn into common butterflies.  These caterpillars tend to live on dill stems so tomatoes don’t seem to be in an immediate danger. 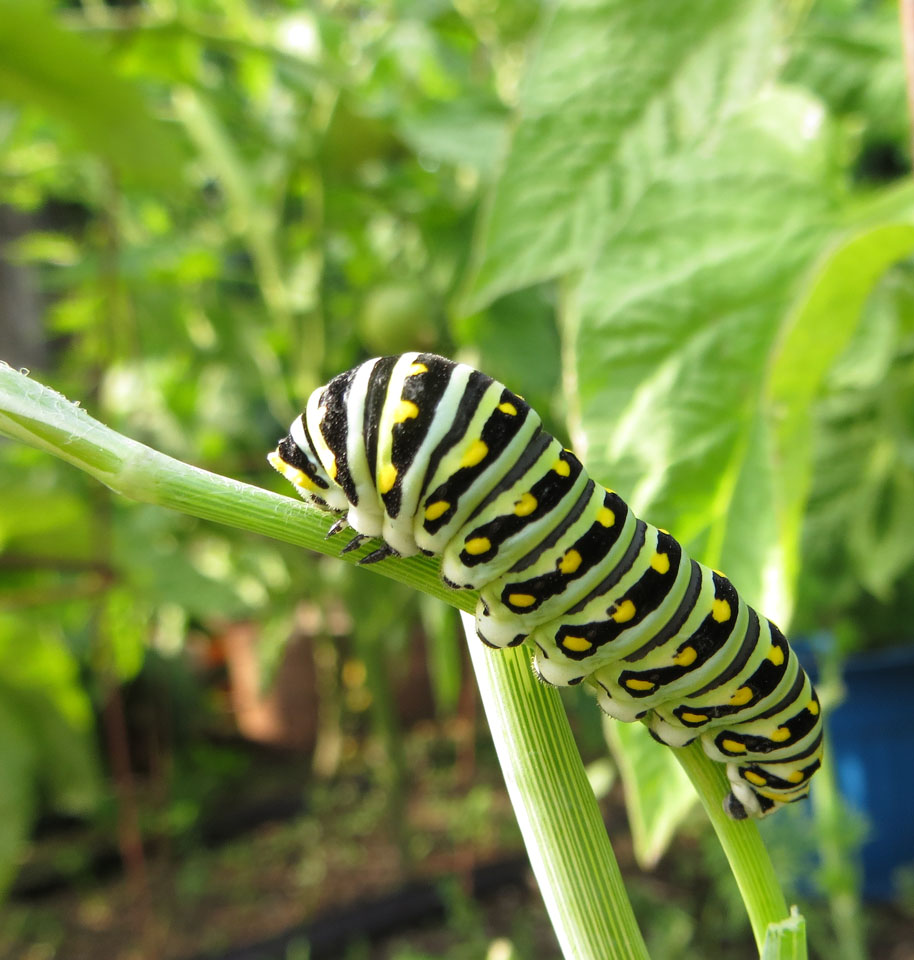 September seemed to mark the end of the tomato care struggles.  It was the time to enjoy the fruits of our labor.  Most of the fruits were now fully grown and turning red. 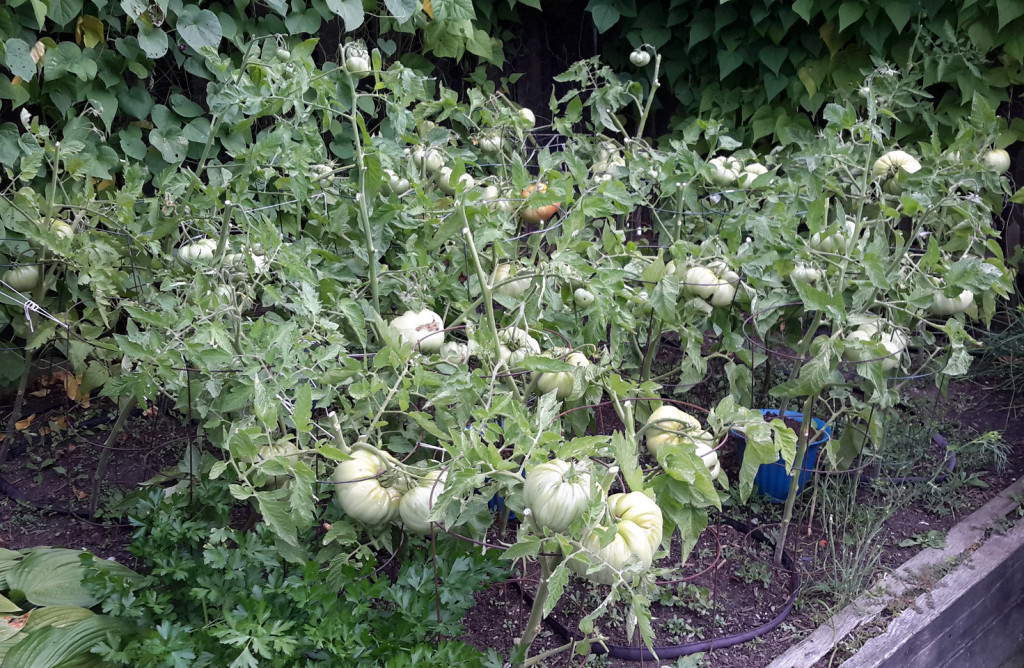 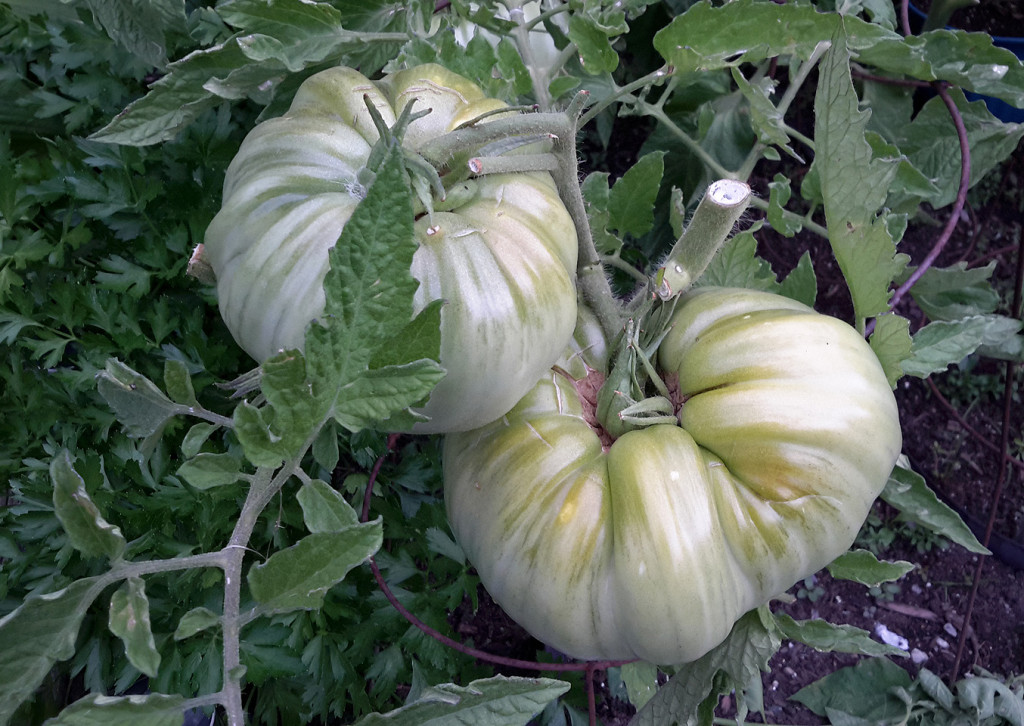 This little patch of land produced over 150 red and raspberry colored tomatoes. Most tomatoes were very large. The biggest weighed over 1.3 kg. The tallest plant was almost 2 meters high.  I shared the crops with family and friends and overall I would say that this project was successful, but would I do that again? 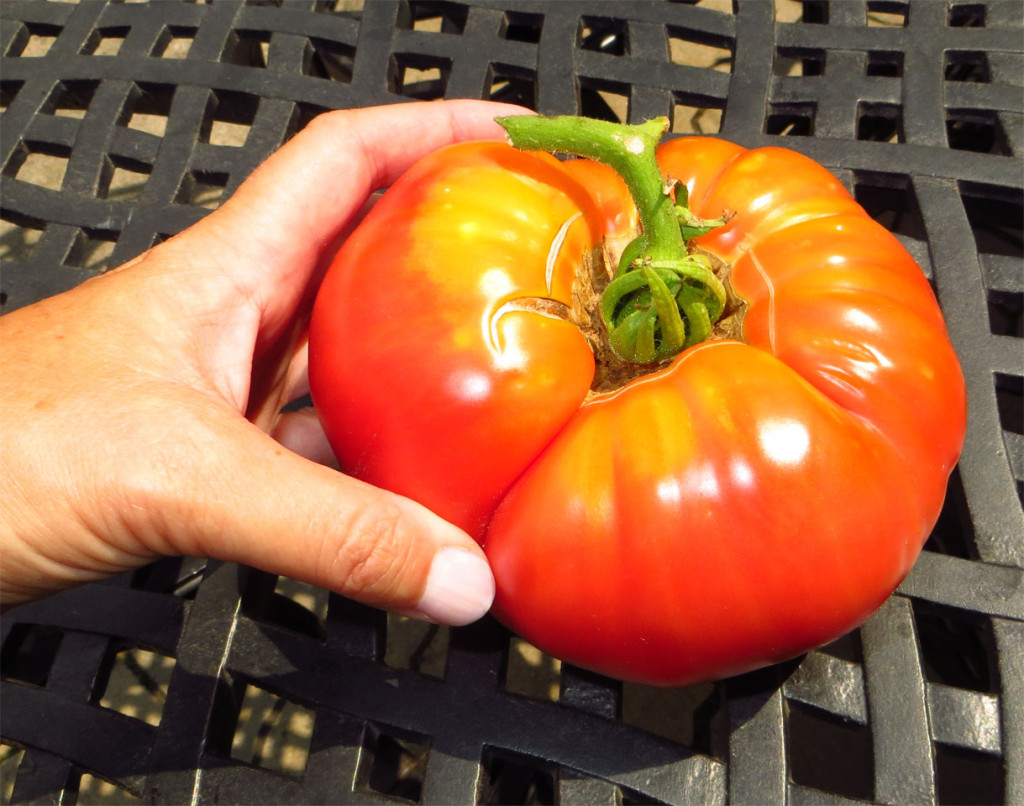 I have certainly learned a lot and enjoyed the taste of fresh home-grown tomatos. In the aftermath however, the effort and expenses of setting up and maintaining all the plants was huge. If I ever decide to plant again, I will most likely buy a couple seedlings from the nearby nursery, preferably different types and only the ones that don’t grow so tall. I think 5 to 10 plants is more than enough. It is always possible to simply buy more tomatoes at a local farmers market.